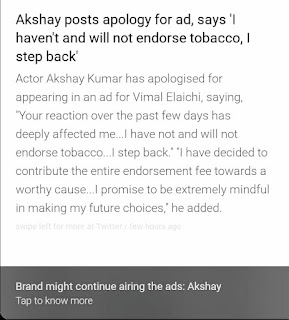 Classic case of having the cake and eating it too.

What Bloody Hypocrisy! First, the 50+ actor endorses the tobacco-based product ("I don't know that it has tobacco!?").

Then his fans howl in protest and to avoid the backlash pesto says that he will withdraw and will not endorse any such products in the future.

He also says that the endorsement money will be given for a "WORTHY CAUSE".

At the bottom of the same post, it says the brand will continue to air the advertisement.

When will we realize that our reel heroes are not real heroes? They have feet of clay that will melt at the first instance.

Niketha Nigam: The product doesn't have tobacco but this brand majorly deals in pan masala products. They are just doing surrogate advertising. Casting 3 top most expensive actors for selling elaichi 🤣🤣🤣🤣

Raj Sampat: I m doing business of Vimal pan masala, first of all Vimal is not tobacco, so cut out miss confession of the product...

Raj Sampat: Anil Ramesh on the packet itself they have written pan masala

When former James Bond star Pierce Brosnan faced flak last year for appearing in an advertisement for Pan Bahar, a mouth freshener, a spokesperson for the manufacturer argued that the outrage was the result of “public misconception” since he explained, the company didn’t “produce either gutka or pan masala.”

Ashok and Co, the company that produces Pan Bahar, does manufacture pan masala. It only doesn’t add tobacco to the sachet, because state governments started banning all food products containing tobacco after new regulations were framed in this regard in 2011.

While it is true that the actor was only endorsing a mouth freshener, the ‘misconception’, seems to be less a fault of the public and more a deliberate strategy by companies like Ashok and Co, who use tobacco-less products to market and sell tobacco products. Welcome to the world of surrogate advertisements – where the product being advertised is only a front for selling another product, usually a banned one.

Those manufacturing smokeless tobacco products have been resorting to this strategy for a long time now. So when you see Ajay Devgn promoting Vimal Pan Masala or Priyanka Chopra promoting Rajnigandha Pearls, both of which don’t have tobacco or nicotine, you must understand that they are not just selling pearls, they are selling something else too – a brand name that’s also associated with tobacco-containing products. It is a strategy used by most companies, done with the aim to sidestep laws that restrict the manufacture, sale, and advertising of these products.

In 2003, for example, the Cigarettes and Other Tobacco Products Act (COTPA) banned all direct or indirect advertisements of any tobacco products, except at the point of sale, storage, or manufacturing. A study conducted soon after found that the “annual cost of advertisement of plain Pan Parag on two television channels alone is 3.8 times its annual sale value.”

Were they running the company into loss then? Not really, if the tobacco-containing Pan Parag made up for the remaining expenses on advertising on Pan Parag and generated profits on top of that. “This indicates that the Pan Parag pan masala advertisements are a surrogate for the tobacco product (gutka) the company manufactures under the same brand name,” the researchers had to conclude in the study, which gave sufficient leeway to the company.

What seems to have come to the aid of manufacturers is another law that has really helped them sidestep the previously stated laws. The amended cable television network rules allow the usage of the brand name and logo of a tobacco product, subject to a few conditions, provided the product being sold does not contain tobacco. This has been used ingeniously by the manufacturers of the tobacco-containing pan masala or gutkha.

For instance, according to its own website, the pan masala Ashok and Co manufacturers went through three phases – selling pan masala without tobacco until 1988, then with tobacco, and after 2011, again without tobacco. However, the brand names for the pan masala — ‘Begum’, ‘Natkhat’, ‘Wah’, and ‘Dilruba’ — continued to be the same.

If the manufacturer could get the brand name stuck in the consumers’ minds, at a shop, they only had to choose whether the pan masala they wanted was with or without tobacco. If they chose a pan masala with tobacco, the nicotine in it would do the rest of the trick. Even if they were driven to the shop to buy a tobaccoless product, advertising tobacco at the shop itself wasn’t banned. The manufacturers had ensured that advertisements continued to reach consumers. But the Food Safety and Standards (Prohibition & Restrictions on Sales) Regulations, 2011, banned any food products containing tobacco and nicotine from markets, effectively banning even the production of tobacco-containing pan masala and gutkha. Any allegations, as the spokesperson for Ashok and Co would say, of surrogate advertisements would be meaningless if manufacturers couldn’t make the product that they are accused of surreptitiously marketing. Except, just like manufacturers found a way to work around the 2003 ban on advertisements, they have found a way to circumvent the 2011 manufacturing ban.

Only about a fortnight before Brosnan landed in the Pan Bahar controversy, the Supreme Court had revisited a submission by the health ministry that explained how the 2011 regulations were being flouted. The ministry had informed the court that “manufacturers are selling pan masala (without tobacco) with flavoured chewing tobacco in separate sachets”, which are often “sold together by the same vendors from the same premises.”

The spokesperson for Ashok & Co had told the BBC at the time of the controversy that they had chosen Brosnan because he is “suave, cool and a master-blender.” There couldn’t a better PR statement. The pan masala manufacturers’ plan of selling twin gutkha packs to be mixed as one, and advertising it through a tobaccoless product of the same brand name, requires a lot of mix-up or mixing. It is a master blender of a plan.

These surrogate advertisements too are then a health risk because every fifth adult uses smokeless tobacco in India, and perhaps more are gravitating towards it due to celebrity endorsement. A WHO monograph in fact argues that more than half of oral cancers are caused by smokeless tobacco. The clandestine production and sale of these products is something that perhaps only the government can stop – a process that for now is being gradually pushed forward through litigation and might need rules that are framed in a better manner. However, that this process does happen is something a casual visit to your local cigarette and paan shop will easily reveal.

If celebrities still endorse these products, it shows that they don’t mind being part of this cunning and dangerous trade. They can’t plead ignorance. Brosnan at least took a stand against Ashok and Co after facing criticism, but that didn’t stop the company from using the advertisement. When the Delhi government wrote to a bunch of actors that today participate in such surrogate advertising of smokeless tobacco, only Sunny Leone cared to reply and agreed to not endorse the products. For others, a little moolah is all it takes to endanger lives.

Deepesh Agarwal: I believe one can’t undermine the power of a binding contract I believe sir (the actual reason why the ad won’t be taken down). I am not sure what he was thinking “ok I’ll endorse Vimal elaichi (not a to tobacco) and the public won’t notice the pseudo marketing”? I am mean grow up Akshay as I am not sure what you were thinking that Indian citizens are so innocent that they won’t realize what you are really trying to do here? It doesn’t matter if it is elaichi and not tobacco. At the end, the true test is how the advertisement is perceived by the general public. At least Ajay Devgan (still not a great example though) endorses Vimal knowing fully well the reputational risks (a lot of memes are already there) unlike this double standard and hypocrite guy!