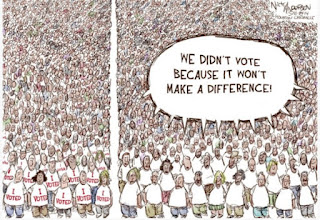 A clear indication that the old city voters are totally disillusioned with the partisan tactics of the AIMIM but at the same time shows that the other parties too, did not make any special efforts to make the general voters to come out and vote. It looks like all political parties seem to be ignoring the old city and its voters.

On average 2 out of 3 urban voters did not exercise their fundamental right - they did not vote.

What it means is out of 33% of votes polled, if a candidate gets half the votes, he or she would be declared the winner in the "first past the post" rule of Indian democracy.

Sadly, it means that our elected MP has the mandate of only 16.5% of the total voters. The silent majority has won the war! The urban voters so very angry and indignant on social media especially on Facebook, Twitter, YouTube, and WhatsApp have remained paper tigers.

Only wish that they had come out and voted and showed their alacrity the same way they forward inane messages, videos, and images.

But alas they remained in their houses, had nice meals (courtesy Swiggy, what else) and watched mind-numbing TV serials like God of Thrones and movies, and wiled away their time on social media and watching Live TV from the comforts of their Air conditioned drawing rooms.

And all of us complain about the type of governance and the type of MPs and MLAs. We get the government we deserve!!