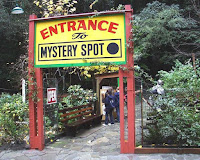 Mystery Spot is a tourist attraction located near Santa Cruz, California, USA. Opened in 1939. the small site’s (which is about 150 feet in diameter) claim to fame is that that it is a place where the laws of gravity do not apply and provide a number of demonstrations in support of these claims.

The official website speculates that a spacecraft is buried beneath the Spot, or that carbon dioxide seeps out of the earth. Another popular speculation is that gravity is affected here, causing nausea and incorrect instrument readings. 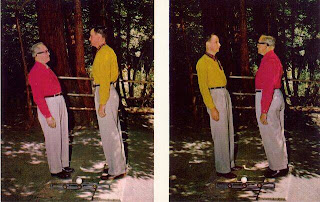 The Mystery Spot is a tilt-induced visual illusion. The illusion experienced by visitors results from the oddly tilted environment as well as standing on a tilted floor. Inside the tilted room of the Mystery Spot misconceptions of the height and orientation of objects occur. Even when people are standing outside on a level ground, the slant of the building in the background causes misconceptions as we judge the height of people using the slant of the roof rather than the true horizon.

As visitors travel through the site, they try to habituate to the tilted environment. The effects of this adaptation are then exploited, especially within closed structures, so that visitors may feel as though gravity does not operate as it should within this Mystery Spot. Also, visitors may feel light-headed or dizzy due to the brain's attempt to adapt to the visual tilt.

The Mystery Spot proprietors promote the attraction with the liberal use of dispensing of free bumper stickers. The visitors of mystery spot use these stickers to claim that they have visited the mystery spot. I have seen cars in bay area and inevitably all of them belong to Indians and they proudly spot the stickers of mystery spot. A great marketing ploy. 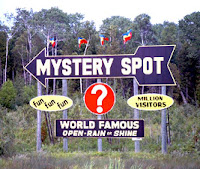 As a marketing teacher I was very impressed with the way the spot was marketed. There were many direction pointers (very prominent arrows pointing out the direction). One employee was standing right at the road and telling the visitors whether there was space left in the spot or if the space was filled up. The entrance ticket was quite costly but the tour was well organized. The teenage guides were perky, intelligent and had infectious bubbling enthusiasm. They had nice touches of weaving a mystery around the experiments – of a ball rolling up a gradient and visitors  ability to stand in a tilt, defying gravity.

Like all the places in USA there was a great souvenir  shop where one could buy great memorabilia of one’s visit to the mystery spot.
Posted by Dr. M. Anil Ramesh at 7:45 PM