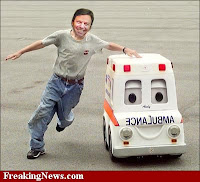 Ambulance chasers: America is a place where dreams are made and nurtured. It is a place of immigrants who made it big. Take for example the following names, Andrea Agassi, Mc Enroe, Michael Chang, and Pete Sampras. Do these names ring a bell? All are tennis legends. Interestingly all these tennis stars are not full blooded Americans. They are second generation Americans i.e. their parents are not Americans. Andrea Agassi's father is a Iranian, Mc Enroe is Irish, Chang is Chinese and Sampras is from Greek background.
So a concept of Ambulance chaser does not come as a surprise. Ambulance accusers are aggressive lawyers who are always monitoring the local ambulances. Why do they monitor the ambulances? Ambulances are always called to the scene of crime. Scene of crime means accident. In a country that is so systematic ambulance chasers find business opportunity in a scene of crime.
Litigation in USA is very long drawn and very costly. Accident would mean a protracted battle between the concerned parties about involved in the accident. Inevitably insurance agencies would also get involved. Accidents also means hospitals and other expenses. If the insurance companies do not agree to a out of court settlement it would means legal battle.
This is where the ambulance chasing lawyers steps in. They would approach the party at the scene of the accident and convince them to make him their lawyer. The contract is that they would fight the battle for the party and whatever is the settlement made by the other party or by the Insurance agency, the lawyer would get a fixed percentage of that settlement. From that time aggressive lawyers is always termed as ambulance chasers.
Posted by Dr. M. Anil Ramesh at 11:52 AM