Two mistakes - The tale of a salesman 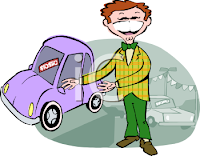 A new salesman was regularly coming late to the office. Compounding the problem he was leaving early. His supervisor bore with him for two weeks. After two weeks the new salesman was questioned about his behavior. “How can you be late in the morning and leave early?”. “ I can’t be doing the same mistake twice a day” was the reply. Meaning that as it is he was coming late, that is the first mistake. He can’t be committing another mistake by going late. That is why the smartie was going early.
Irritated by the cockiness of the salesman and to test his loyalty the Human resource department added Rs 500/- extra (more than what was promised) in his pay cheque. The salesman happily accepted the pay cheque and kept quiet. The next month the Human Resource department put Rs 500/- less in salesman's pay cheque .The salesman immediately complained.
The Human Resource manager called him to his office and said” Last month I had put Rs 500/- extra in your pay cheque. You never complained. Why is that you are complaining when I have put Rs 500/- less?”
"I can tolerate one mistake. But I can’t tolerate two mistakes” was the quick reply
Posted by Dr. M. Anil Ramesh at 3:55 PM