San Francisco is a beautiful city. It is a very well managed and is sparkling clean. And it has many landmarks to boast of including the Golden gate and yes of course the Alcatraz. Every one throughout the world has heard about the impregnable prison from which no one could ever escape.
In 2008 I had the fortune of visiting Alcatraz along with my family. The prison is on a island and the visitors have to take a ferry service to reach Alcatraz. We all had assembled at the Embarcadero from where the ferry would take us to the island prison of Alcatraz.
As we are being ushered into the ferry a strange event was taking place. Each family which was going to the island were being photographed against a huge framed photograph of the Alcatraz. Being a cautious Indian, I said that I don’t want to be photographed. The employee of the ferry explained to me that the process was compulsory and that I don’t have a pay a penny for the service.
My entire family was photographed against the  background and as we were trooping out of the cubicle the ferry employee handed out a card and said "your 2 (4 x 6 )photographs will be available in the evening. They would be costing 25 US$. If you want you to pick them up".
My brother- in-law later explained the entire concept to me. There is a federal law that says that all people leaving the shores of USA will have to be photographed. So the visitors leaving the shores of San Francisco shore anyhow have to be filmed. So why not make it into a business opportunity. The total cost of taking the photographs and the prints may cost 100 US $ per day. Even if 4 families take the photographs per day the cost of the operation would be recovered. On our return that evening I saw many visitors picking up their photographs as keep sake of their visit to the Alcatraz. 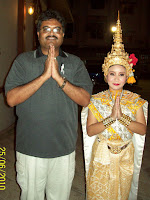 The ploy of taking photographs against exotic backdrops and later pasting them on plates and other memorabilia has been taken to another level by the Thais. Visitors to Bangkok are very much attracted by the sight of very beautiful girls posing with them.Two hours later the photographs are out and the visitors have to pay 200 Bahts for the keep sake photograph

The marketing of the island prison is very impressive. The Visitors at Alcatraz are given audio commentary sets through which they can listen to the history of the prison. There are many cells in Alcatraz which are maintained in the same conditions as they were when the prison was operational. The famous escape attempt is demonstrated to the visitors in dramatic detail which includes the showing of the pock marks of the bullets on the prison walls.
It is said that for a decent fee visitors were allowed to spend a night in a prison cell. But this was with drawn later as the visitors were scared out of their skins. I was sure that spending a night Alcatraz prison when the lights are switched off is a spooky experience.
Posted by Dr. M. Anil Ramesh at 9:23 AM