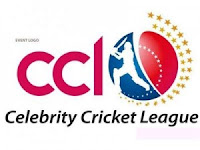 Vishnu, son of Mohan Babu the Telugu film actor was on the television the other night. He was talking about the professional cricket league that the film stars wants to start and run. He called it the CCL.


Film stars are coming together to form the Celebrity Cricket League (CCL) similar to IPL. In this league of CCL, star cricketers from all the industries will take part. The teams are titled as Bollywood (Mumbai Heroes), Tollywood (Telugu Tigers), Sandalwood (Bangalore Stars) and Kollywood (Tamil Superstars). During the CCL six league matches will be conducted and one final. The final winning team will receive 25 lakhs as the prize money.
This sounded very strange and funny. Readers especially readers who are acquitted with strategic management would immediately recall a concept called core competence. A film star to talk about cricket and talk about launching a professional cricket league like the IPL is very strange and borders on exotic day dreaming.
Cricketers playing professional cricket is like Sachin romancing Aishwarya Rai on the big screen and saying that his movie is in direct competition with a blockbuster from ShahRukh Khan. Come on Vishnu, we know that you make dreams. But these dreams should be made for others. Please do not believe in those dreams. Because the market conditions will bring you back to the earth. 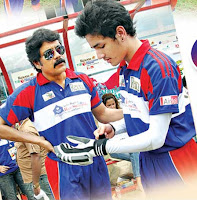 Yes there would be a novelty factor of watching film stars play may be for one time. But I seriously doubt if anyone would like to see the antics of Vishnu, Bala Krishna, Pawan, Kalyan, Nagarjuna or any other  film star more than once. Yes they say that Akhil (son of Nagarjuna) is a very good cricket player- but all the reports that Akhil being a good player has come from the film press and not by any serious sports commentator or any cricket journalist.
But this fallous thinking that because you are good at one thing you would be good at everything has been proved wrong many times. Many famous personalities have tried proving it correct at their own peril. We can remember Salim Durrani, Sunil Gavaskar, Sandeep Patil, and Vinod Kambli who acted in movies. Needless to say all their movies bombed at the box office.
The only sensible super star who stayed away from the glitter of the bollywood is Sachin Tendulkar. I am sure he was offered many roles but he was steadfast in refusing to act in any one of them. Sachin is so humble that he refused to act in an advertising film that asked him to hit sixes with a cricket bail.
He is reported to have said that he would not do it as that would mean that he is bigger than the game of cricket itself. Finally he relented and allowed the advertising film to be made with a cricket stump. That is Sachin is shown hitting sixes with a cricket stump. There are so many lessons we can learn from Sachin Tendulkar.
Posted by Dr. M. Anil Ramesh at 9:27 AM