The Power of a retort - Winston Churchill 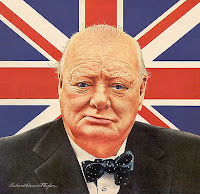 Elmer Wheeler once said “words are like bullets once fired they can’t be retrieved”. Many times someone could make a comment or a snide remark that would make others laugh at us. How do we turn the tables on the other person and make him look like a bigger fool?  That is the power of a retort. Let’s see some examples.
Winston Churchill – the Prime minister of England was a short and fat man. But his word was razor sharp. Once Churchill and his friend were walking on the sidewalk. They reached a spot where only one person could pass. Trying to hurry, Churchill's friend said “I do not allow fools to pass me” To which Churchill responded saying “I do” and gave way to his friend.
A friend of Churchill had a build exactly opposite to that of Churchill. He was thin and very tall. Seeing his scrawny frame Churchill remarked “My friend, you are so lean. Looking at you any one would think that England is facing a famine!”  Looking at more than generously endowed Churchill his friend remarked “looking at you that person will know why England is facing a famine”. For once Churchill was speech less.
There was a lady politician who opposed Churchill tooth and claw. Once at an end of an animated argument she said “Mr. Churchill I neither like your politics nor your lip”. The entire parliament roared in laughter. Churchill responded “Let me assure you madam neither of them will bother you in any way. Now or ever”.
The same lady once exasperated with Churchill burst out saying “Mr. Churchill. If you were my husband I would poison your coffee”. “Madam if you were my wife, knowing that there is poison in the coffee, I would drink it” was the ready repartee that Churchill gave.
Churchill was giving a roaring speech. But unfortunately it was in an area where his party was not very much liked. He was being bothered by a heckler. Irritated by the antics of the heckler, Churchill shouted “You are fit for the slums”. The heckler stood up and said “Mr. Prime minister you can’t say that. Take it back”. Churchill said “You are right. I take back my words. You are not even fit for the slums’. The heckler watched with his mouth open as the tables were deftly turned on him.
Once when he was giving a speech a cabbage came whistling towards Churchill. He adroitly dodged it and said “It looks as if the opposition leader has just lost his head”. Churchill once very famously said “You can bear a manly man, you can bear womanly women but you can’t bear a boily boy”. 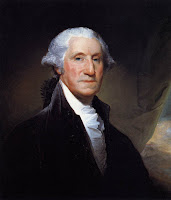 A friend of the first President of USA George Washington saw the president polishing his own shoes. Shocked by the sight the friend asked “Mr. President do you polish your own shoes?” To which Washington responded by saying “Yes I do polish my own shoes, whose shoes do you polish?”
Posted by Dr. M. Anil Ramesh at 10:15 PM