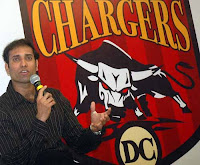 Deccan chargers should have retained VVS Laxman. Their argument was that Laxman has outlived his utility. Deccan chargers management should realize that money is not everything in life.  They have lost VVS Laxman in the very year that he got his Padmashree. Deccan you have lost the photo opportunity of the century!.!Like they say Deccan Chargers loss is Kochi’s gain. Sorry to see you go VVS. You have been an inspiration. Especially after you refused to be called a legend and made yourself a part of the regular team. VVS you have proved a point that even the great Sachin Tendulkar did not or could not. Hats off to you VVS. You are our Hero. I am not sure how the Deccan chargers would fare after losing a legend like you.
Posted by Dr. M. Anil Ramesh at 7:24 PM