The Making of the Prime Minister - Narendra Modi - Part I 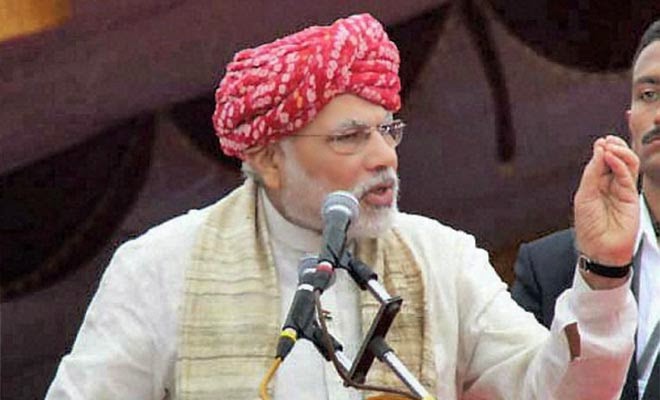 The dust has settled on India’s longest drawn out Elections. Modi and BJP are firmly into power after defeating decisively their Bête noire Congress. BJP becomes the first non-congress party to win a majority, Modi the first chief minister successfully launching a prime ministerial campaign.  NOTA (none of the above) option becomes a reality and gets 60 lakh votes or 1% of all the votes polled.

So how did Modi succeed when many others have failed?

1) Presidential Mode: Modi realized that Indians like tall leaders and leaders who promise them hope and better life. He launched a US style of personalized campaign. Modi projected himself as the deliverer. He put himself before the party. The slogan makes it very clear. Ab Ki Baar – Modi Sarkaar. In the fragmented, fractured Indian polity projecting himself instead of the party was indeed a master stroke. (But there have been instances where voters returned from the both as they could not find Modi’s name on the EVMs).


Lesson: In politics image is everything and MODI projected the image that people wanted to see.


2) Pareto’s law: In simple words Pareto’s law says 80% of the result comes from 20% of the work. Modi realized that it should focus on 7 states where BJP has a presence and where could do well (U.P, Bihar, Maharashtra, Madhya Pradesh, Gujarat, Rajasthan and Karnataka). These seven states have a total of 276 Lok Sabha seats slightly more than 50% of a total 543 seats.


BJP did remarkably well in these states and won on its own 211 seats and with the help of 18 seats won by Siva Sena (its ally) the total tally go up to 229 that is an astonishing 83% of the seats in these 7 states.


Remarkable in as many as 4 states U.P, Maharashtra, Karnataka and in Bihar BJP was not in power. Its image was not very favorable in Karnataka (BJP’s government was riddled with corruption charges when it was in power the last time it ruled the state).


Modi’s concentration was also on another 7 states where it could do well, Assam, Haryana, Jharkhand, Uttarakand, Himachal Pradesh, Chhattisgarh and Delhi. These send 65 members to the lower house and BJP got 52 out of 65 seats a whopping 80%.


Lesson: Build on your strengths and maximize your performance.


3) Rabble rousing: Everyone loves a underdog and Indians are no exceptions. MODI projected himself as a daheti (local son of the soil) fighting the gigantic Congress headed by Sonia Gandhi and Rahul Gandhi. He effectively used his very humble beginnings (a tea stall owner) and his lower caste birth to his advantage. Oounch, Neech become the bullets that MODI and Rahul fired at each other. MODI used the in experience of Rahul to his advantage. Along the way came the MODI punchlines and promises:


Mysore: Mysore will draw tourist like Paris. We have vast deserts in Gujrat but till attract lots of tourists, just think what I can do for Mysore


Varanasi: first I thought that the BJP sent me here. Then I thought that I am going to Kashi. But after I came here, I feel that Maa ganga called  me.


Siliguri: had there been no tea, I could not have sold tea. We have close association. Aap bhi chaiwala, main bhi chaiwala.


Hyderabad: I am fortunate as the Hyderabad liberation day you observe on September 17 is also my birthday.


Imphal: even Vaasthu Shastra says that the northeastern corner of the house must receive the greatest care. India will prosper when the north east prospers.


Very clearly MODI is a master in crowd mesmerizing. He has a dedicated band of copy writers and the copy that is given is delivered with a flourish just like a well-trained public speaker. MODI talks what the people want to listen. He touches the local issues and uses emotions to connect. Check out again what he said in Varanasi and in Hyderabad. Contesting in Varanasi was a well though out strategy. By contesting from Varanasi he is making his most ardent fans the Hindus very happy.


Lesson: Voters love hearing from a leader what they want to listen. They want to be assured that their future is safe and MODI appeared to be one among them and he was connecting on a personal level.
Posted by Dr. M. Anil Ramesh at 10:42 AM