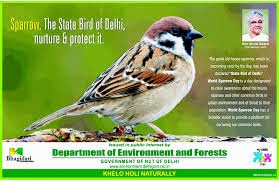 15. NEW DELHI: The Delhi's state government's advertising campaign on the occasion of World Sparrow Day on Wednesday carried a picture of the Eurasian tree sparrow, which is neither found in Delhi nor in most parts of India, mistaking it for the house sparrow.

It was an ironic reflection of the plight of the sparrow, declared Delhi's state bird last year when it had all but disappeared from the city. The matter would have escaped attention but for the massive number of bird lovers in Delhi.

Some furious bird lovers called the environment department while a discussion was launched on social networking sites.

The picture had been downloaded from the internet and while the environment department officials accepted the error, they said the idea was to depict a sparrow which is what the advertisement did.

"For a large part of the public, the bird in the ad is a sparrow and it becomes immaterial that it is the wrong species. We managed to get the message across. The difference would have been evident to only a trained eye. However, such an error should not happened and will recur in future," said an government official.

16. NASA uses the metric system while Lockheed Martin uses the English system when building a satellite: A team of Lockheed Martin engineers used the English system of measurement, while the rest of the team used the metric system for a Mars orbiter. The use of two different measurement systems prevented the spacecraft's navigation coordinates from being transferred from a spacecraft team in Denver to a lab in California. The orbiter was then lost in space, and NASA was out $125 million. (1999)

During a routine check, inspectors removed and replaced all safety valves, except for one, which was never put back. Unaware that the safety valve was missing, a worker pushed the start button, and gas began to leak out leading to a loss of 3.4 billion US dollars in repairs (1994)