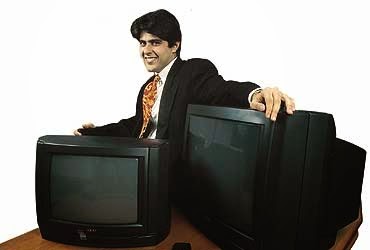 Kabir Mirchandani was the original prince of price cutting. One who redefined prices and margins in entertainment electronics especially Televisions . Kabir Mulchandani, now 41, had captured popular imagination as a "gotcha-have-it" guy in the mid 90s. Someone who wrote his own rules and got others to play by them.

Kabir’s company Baron entered the Indian CTV market on December 23, 1994, reviving the Akai brand and crashed the prices. At that time each Inch of television would cost a thousand that is a 21 inch TV was costing 21,000/- and 29 inch TV was 29,000/-. The existing TV makers were well entrenched and were happy with respective market shares.

When Kabir entered the business, black and white TV sets were outselling colour sets three to one. At the heart of this imbalance was the price. An average 21 inch colour set in 1993 cost nearly Rs.21,000, roughly four times the national per capita consumption expenditure.


So, Kabir "incentivised" the shift to colour. Through gifts, financing schemes and exchange offers. He broke down the price barrier and brought colour television into lower middle class homes. In this he was helped by the cable revolution which bloomed in 1992-93. Kabir realized the potential of luring consumers if he could make it affordable. And he did just that.

Armed with a sizeable advertising budget - it crossed Rs.120 crore in 1997 - Kabir used the media cost effectively to spread this message of affordability His choice of the medium, mainly newspapers and large hoardings, was in itself unconventional.

When Mumbai's hoardings went empty, Kabir offered to take them at less than 25 per cent of the rentals, gaining exposure at a fourth of the price. Similarly, his advertising in papers are normally on week-ends. Rationale: big-tag shopping takes place with family in attendance on holidays. "I sell around 2,500 sets on Saturdays and Sundays as compared to 1,200 on weekdays," Kabir explained.

The most effective was the exchange scheme that Kabir pioneered. Well aware of the national tradition of not discarding anything, Kabir decided to play on it. For as little as Rs.9,999, he goaded owners of old TV sets to trade them for brand new ones. Other manufacturers soon followed suit.

Even the competition acknowledged that Kabir had made a difference. "The consumer electronics market has periodically seen new marketing innovations," said BPL's then Director Rajeev Chandrashekar. "Kabir's exchange offers have certainly brought a new element into consumer durables marketing." Indeed, the exchange fever has gripped virtually every segment of the consumer market, even cars.


Mulchandani launched  focused buy, buy, buy campaigns with his full-page advertisements. He didn't allow the consumer time to lie back and think. Most purchases were instinctive, which is what the campaigns achieved.
In the process, he changed the rules of the game in entertainment electronics. His strategy was to make people buy rather than sell his product. The strategy was built keeping in mind the price-sensitive and value-conscious Indian consumers. It paid rich dividends.

Kabir Mulchandani sold at wafer-thin margins of 2 per cent, good enough for him to make money through high volumes. In 1998, ties with Akai soured, and Kabir tied up with Aiwa, citing Aiwa's "superior product range".

Akai was the first split-up. But soon, it became a pattern. Baron seemed to have hit it off with Aiwa, but they soon fell out. In the meantime, Baron had declined to renew its contract with Hitachi and soon it snapped ties with TCL. And with each of them, Kabir followed the same marketing strategy to bump up sales. Aiwa's gleaming music systems, for instance, came with offers like 'Rs 7,000 off on your old system and 50 CDs free!'
And with a trade-in, he sold 29-inch TCL televisions for Rs 12,900! But again, these tie-ups soured and Kabir was left looking for yet another partner. Analysts say Kabir Mulchandani's business model didn't have long-term sustainability. For one, it meant frequent switching of collaborators and the race once run couldn't be re-run.

Baron didn't build any back-up strength in terms of after sales service or any credible infrastructure to maintain consumer confidence. That finally meant the doom for the prince but he taught us all a lesson. Be aggressive in the market pace, challenge the holy cows and believe in yourself and offer value to the customers. The things that he missed out - not minding the basics,  not building long term relationships based on trust and not focusing on less glamorous but important issues like customer service, quality and gaining customer confidence.