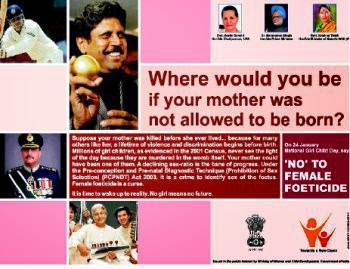 The advertisement  - an appeal to stop female foeticide - showed some accomplished names from different fields like Kapil Dev, Virender Sehwag and Amjad Ali Khan and alongside, it had the photograph of a former Pakistani air chief in uniform, identified as Tanvir Ahmed Mahmood.

The PMO issued a statement saying, "The PMO has noted with regret the inclusion of a foreign national's photograph in a government of India advertisement. While an internal inquiry has been instituted, the PMO apologizes to the public for this lapse." (Jan 2010). 8. Pakistan Navy Goof Up: An advertisement issued by the Pakistan Navy for a multi-national exercise prominently featured images of Indian Navy warships even though India is not among the countries participating in the manoeuvres being held in the Arabian Sea.

The full-page advertisement for the Aman-11 exercise, which appeared in The Nation and Nawa-e-Waqt newspapers, featured images of the Indian Navy's Delhi, Godavari and Talwar-class warships. under the slogan: "Together for peace". The advertisement was to inform about the Warships, aircraft, Special Forces and representatives from 39 countries are participating in the manoeuvres.

Pakistan has not invited India to participate in the exercise due to the strained relations between the two countries. (2010)

10. The Congress party mistakenly used Amul Baby‘s:  photo instead of Rahul Gandhi’s in Gujarat campaign. The advertisement by the Congress party that was published to raise awareness on various failures of Narendra Modi led BJP government was supposed to feature the photo of future PM of India.

Instead, the congress party’s PR agency ended up putting Amul Baby’s photo in the advertisement. (November 2012)

11. Google goofs up, shows PoK (Pakistan Occupied Kashmir) as Pakistan:  Google Insights of Search shows the Pakistan-occupied-Kashmir as a part of Pakistan.

Following this, the Government of India issued a notice to the internet giant Google for the same. "Any wrongful depiction of Indian map and its boundaries is liable for action under the India Information Technology Act. Google has been asked to immediately correct this inaccuracy," said Sachin Pilot, Minister of state for telecom and IT.

Google has intimated that the 'Google Insight for Search' team has been informed and changes will be made immediately.  Sachin Pilot has asked the IT department to survey all such goof ups by different companies and correct them. He also said that the government is waiting for the response of Google and will take appropriate action at an appropriate time. (Nov 2013).
.