IPL auctions or Cattle being sold - The sordid saga of Cricketers sold as Cattle! 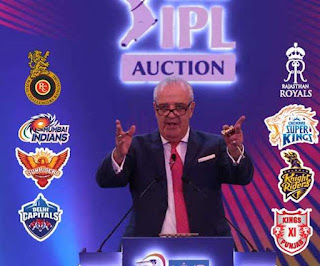 Too much hype and too much money paid for foreign players! At least some of the franchisees will end with an egg on their face!14.5 crores for Maxwell, 1 crore for Umesh Yadav, and no buyers for Hanuma Vihari! What a bloody joke!

Manya Nagaraja: Booming post-Corona economy!! Money, in a poor country, seems to have no value.( haves- have nots gap is unimaginable, even amongst best IPL players 1625 -20 lakhs)  Raju, as a marketing expert, can you pl explain how they (franchise Co) recover or make money, in brief.

Anil Ramesh: Manya Nagaraja sure bava give me some time, will respond by tomorrow!

Manya Nagaraja: You must write an article on this. IPL entrepreneurship - a cost-benefit analysis.

Aditya Sunkara: Especially when Maxwell has proven to be a 'dud' purchase in the past... And Chris Morris has been a useful all-rounder for Delhi, but he is now a bit past his peak.. 16.25 Cr for him will definitely blowback.

Worst of all, SRH, being a Hyderabad-based franchise has not really found a local player who can bring stability but an import from the owner's homeland... Vijay Shankar and Kedar Jadhav are not at all the answer for their middle-order balance...

Anil Ramesh: Manya Nagaraja bava, I will try to explain and that too briefly. IPL is all about money and it is the sixth most-watched event in the world.

The size of the Indian market means that it attracts enormous eyeballs (attention) and money through sponsorship deals, advertisements, and other ways of making money (deals, events, shows, celebrity events, acting as chief guests for shop openings, etc) and gate receipts of people coming to watch the matches.

There are rumors that a lot of betting goes on. Ten years ago the amount per match was Rs 5,000/- crores.

Gate receipt money and the attraction of winning the IPL is another lure!

Coming to the money that is paid, it is demand and supply. Players like Pujara and Vihari are seen as test specialists and don't have many takers.

Actually speaking, Indians have to get more bids as 7 Indians can play to 4 overseas players in the playing eleven.

But auctions are like chess games and teams sometimes bid and pick up a player simply to deny some other team, a player whom they actually don't need but does not want their opponent to have!

For example, KKR wanted to buy Krishappa Gautham but CSK beat both and bought him at 9.5 crores only because SRH wanted him and quite desperately too.

Some players are bought as back up and 2 crores for Kedar Jadav and 1.5 crores for the Afghan spinner is a good buy for SRH!

There is no guarantee that IPL auctions are fair. There is a possibility that they could be fixed.

Foreign players like Maxwell keep failing but still get fancy sums. Chris Morris is good but not at 15.5 crores.

And bava, players actually don't get the entire amount. 30-35% goes as tax, the team management keeps some amount and respective boards also get money.

That is why England and Australia toe the line as far as IPL is concerned. It is their money gravy train. All is all we can expect the foreign players to only get 50% of the auctioned amount.

Also bava, the usual auctions are for 3 years and expect the teams to retain the players for three years and pay the players a third of the amount per year.

If the players don't perform they are thrown back into the auction pool next year and the price goes down.

For example, Steve Smith went down from 10.5 crores to just 2 crores.

National sentiment play a role and except for big-ticket players like Maxwell, the rest of the Aussie players were simply ignored by the franchisees.

This type of bidding leads to jealousy and, imagine Umesh Yadav and Gowtham. Umesh at Rs 1 crore and Gowtham at 9.25 crores and Shah Rukh Khan at 4.5 crores.

Umesh has played for India and the other two are uncapped but get almost 10 and 5 times what poor Umesh Yadav gets.

And Vihari gets s to play at a maximum 4-5 test matches in a year and we expect Umesh and Vihari to spill blood while a young Shah Rukh Khan gets 4.5 crores. This is a lopsided way of judging players and their calibre.

Sincerely hope that Gowtham and Shah Rukh Khan perform and perform at their best. The one shining example of a player coming through the IPL ranks to the national team is that of Natarajan who went from SRH to play in all three formats for the Indian cricket team.

And the life of the highest-paid players is a life of misery. The sword of Damocles hangs on the head that too in this edition of IPL. They better perform at the highest level or their teams will throw them to the wolves, release them and their value goes down!

All eyes will be on Maxwell, Morris, and Jamieson. Sometimes the weight of expectations might be a load too much to bear!

Bava, many times "I scratch your back you scratch my back" also exists. Sachin Tendulkar is a vital clog in the Mumbai Indians team and is very close to the Reliance group. Thus it was not at all surprising that Arjun Tendulkar gets picked for the base price of Rs 20 lakhs.

Most probably he will be the net bowler, and if at the end of the season, the team is comfortably placed at the table, might even get to play a match even though Mumbai Indians have a star-studded team.

Manya Nagaraja: Raju, ( known in our circle), excellent write-up. Made an interesting reading. Some were unknown.