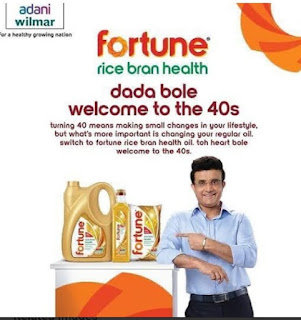 Perils of having a celebrity endorsing the company and its products! First, it was Tiger Woods and now it is Saurav Ganguly.

Many marketing gurus think that celebrity endorsements bring in quick eyeballs, instant recognition, and a chance to bask in the celebrity's goodwill and charisma.

But they forget that the reverse could be true too. The negatives and the bad publicity can stick to the brand and to the products.

Products and services having Tiger Woods as a celebrity endorser realized the same to their horror when he was embroiled in a huge controversy and they all had to beat a hasty retreat.

Similarly, Products endorsed by Aamir Khan also were on a sticky wicket when he too got involved in issuing controversial statements.

Saurav Ganguly suffering a mild heart attack was like a punch in the solar plexus and the company was forced to withdraw the campaign featuring Dada! Such are the perils of Celebrity endorsements. "To do or not to do".

Gopi Reddy: Classic example of brand ambassador destroying brand snap deal which was lost in the air after endorsing Aamir Khan and controversial comments made by him which affected snap deal

Soumya Mohapatra: The other thing I found amusing was...the choice of celebrity for an Ad. I can understand Virat endorsing "Boost" as he is an elite Athlete himself. I don't understand how Sharukh Khan promoting BYJUs or Hrithik promoting White Hat Jr. Is relevant? I am not sure if these guys completed their education properly. Why would a parent get inspired by that and enroll their child into that program?

Anil Ramesh: Very true Soumya Mohapatra it leads to a crisis of credibility. The believability of the expertise of the so-called expert who happens to be a celebrity.

Srinivas Darbha: It is boring to see the same faces so much. Some ads have new faces which make it interesting to watch the ads. I never buy anything just because X or Y endorsed it. I make my choice based on brand and reviews