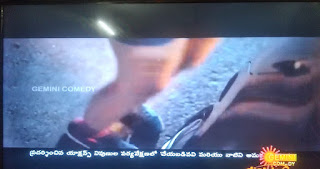 A wise adman once remarked "watching television commercials is the maximum fun viewers can have with their clothes on". Not allowing your imagination to run wild, let us, deep-dive, into today's musing!

Anxiety is eating her and she is unable to call anyone. Her teenage daughter jumps into action. She takes the car's Jack and starts to change the tyre much to the shock and admiration of her mother.

So far so good. Just as the action is unfolding, a warning crawlie appears on the bottom of the scene "action performed under experts supervision, please don't imitate" the dangerous action performed!!!!

"Changing of a car tyre using a car jack". How does it become dangerous, your guess is as good as mine. Dangerous as a GIRL is performing it????

Don't shoot the messenger. The innocuous message might be the handiwork of a freshly appointed  Advertising Executive trying to play safe! Happy watching.

Small Caveat: the crawlie does not appear in the Hindi commercial. It appears only in the Telugu and Kannada version of the commercial that is telecast on popular television channels, in this case "Gemini Comedy"