Balakrishna at it again - Puts feet in his own mouth! 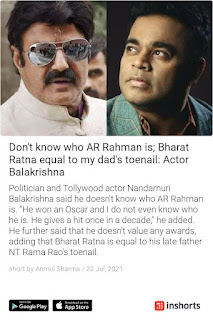 Whenever Telugu actor Balakrishna opens his mouth he inevitably puts his foot inside it. His blabbering on stage is well-known and his speeches are the butt of many jokes and memes.

His completely funny Telugu-influenced Hyderabadi Urdu/Hindi speech where he went hammer and tongs at PM Narendra Modi should be watched on Youtube! He was better than Mr.Bean himself.

And his "Gul huva hamaara Sitara" goof-up was very prophetic when the TDP was routed in GHMC elections.

Now it looks like he is taking his wrath out on A.R.Rahman. To say that he does not know who Rehman is is absolute nonsense.

The legendary actress of India Savitri never got a Padmasri and Keerthi Suresh who essayed Savitri's role in Mahanati got the best actress award!

Does that make Keerthi Suresh a better actress than Savitri?  No way, grow up Balakrishna!