Biryani the most loved food in India - Biryani Sale in one year! 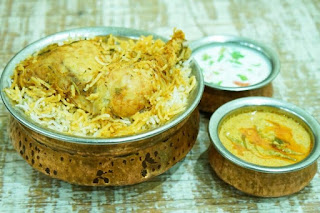 India Ordered 200 Biryanis Per Minute In 2019 & Pizzas, Burgers Can Bow Before The 'Baap' Of Foods

In recent reports from the country's major food-ordering apps, one thing is clear across the board - Indians are absolutely head-over-heels in love with biryani, as the dish topped out the most-ordered rankings for the third year in a row - a staggering 10 crore biryanis were ordered in 2019 when compiling statistics from Zomato, Swiggy & UberEats.

Hyderabadi, Keralite, Lucknowi, Delhi-style, or Kolkata, there's no shortage of ways to prepare the dish, and perhaps this incredible versatility across cultures and tastes is why biryani has retained its fame for half a millennium.

Although somewhat unsurprisingly, Hyderabad has been the biggest contributor to 2019's figures, with 60 lakh orders of chicken biryani and 50 lakh orders of mutton biryani.

Keep in mind that Telangana, in a 2016 survey by the Registrar General of India, was crowned the non-vegetarian capital of India, with a near-99% rate of meat-eaters.

In interviews with The Times of India(TOI), food delivery app representatives said, “It is easier for restaurants, and for those of us in the food business, to deliver biryani to our patrons than, say, a dosa, which can break on the way. Biryani also requires a minimum, fuss-free packaging.”

Regardless of how much you're willing to pay, you can get a pretty complete, fulfilling meal when ordering a biryani dish. Swiggy says that Mumbai's 'Chal Dhanno Tawa Biryani' sold for a jaw-dropping Rs 19, while Pune's 'Chicken Sajuk Tup Biryani' was the most exclusive offering you could order, at Rs 1500 per dish.

While biryani purists have remained loyal to their favourites across generations - think of Hyderabad's Paradise Biryani or Mumbai's Lucky Biryani - today's foodies are fickle, and perhaps a little novelty in diets and taste have led to unusual combinations.

“People are opting for low-fat biryani, vegan biryani, tofu biryani, and other biryanis that are unheard of, like pasta biryani,” said Bengaluru chef Kavita Jaisingh to TOI.

Whichever way you look at it - more biryani definitely can't be a bad thing.