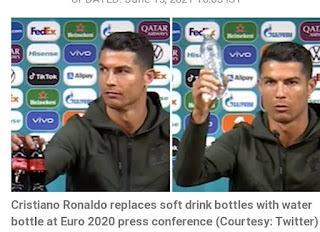 My conversation with Soumya where I predicted that  FIFA will give a ruling not to remove sponsor material. And it happened.

17/06, 8:01 PM Soumya Mahapatro: Sir but honestly what can a company like Coke do here? They are the official sponsors of Euro..their bottles are supposed to be kept on the table ..now that this has become a trend..all players are doing it.

17/06, 8:02 PM Soumya Mahapatro: Yesterday two other Footballers did it..and Pogba removed the Heineken beer bottle I guess because he is a practicing Muslim

17/06, 8:03 PM Soumya Mahapatro: Yes...because if they counter it...they are gonna get more bad press from all the fans of Ronaldo..who has a huge social medial following..they can just pray to sweep it under the carpet

17/06, 8:04 PM  Dr. M. Anil Ramesh.: It is FIFA that must be shivering in its boots. The mafia that FIFA is, it might bring in a dikait (ruling) saying that no sponsor material can be touched. Then CR and Pogba will not dare touch them. They know when not to upset the gravy train.

17/06, 8:04 PM Soumya Mahapatro: I think Pepsi must be thanking its guardian angels...their rival is getting a bashing that too without spending a penny 😂

17/06, 8:11 PM Dr. M. Anil Ramesh.: Frankly speaking don't think that celebrities influence buyer behaviour so much. They might be taken in emotionally but at the end of the day, they will go back and consume their existing choices. Coke will ride this out. In fact sales might even go up. If  CR can influence his fans so much we all would be as fit as him.

As fans, we take in what we want. We want to play like CR but don't want the hard rigour and training that goes along with it.