OTT and The interesting web series about Leander Paes and Mahesh Bhupathi - Breakpoint! 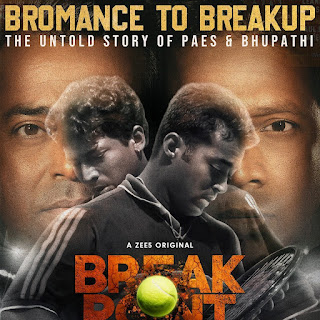 OTT is both a blessing and a curse. It gives us more choice and at the same time, most of the choice is crass and trashy.

We trash at least 50% of the shows and movies within the first half an hour or stop watching after the first episode.

Most shows are unbearably boring. At least with OTT, there is no dissonance as we don't pay anything upright.

"Murder in the building" a much-hyped series was so boring that it can be the best medicine for insomniacs.

So with much trepidation, I started watching Breakpoint the web series on Zee 5 and it was a refreshing watch. The series is about "what could have been but what it had become".

The web series though lengthy is candid enough for us to understand the fragilities of super athletes. It graphically their mental insecurities!

Feared by every team including the games Woodies, the Indian express could only win 3 grand slam titles together!

And to think that the Bryan brothers who came in later finished their careers with 16 grand slams! What a waste of prodigious talent.

Leander ended his career with 18 grand slam titles and Mahesh with 12! If only they had buried their differences it could have been 25 for Leander and 18 for Mahesh!

A must-watch series. The only thing left out was the sordid deal in the 2012 Olympics where Sania Mirza was used as a bargaining chip to appease the sulking Leander!

I am sure that the makers wanted to get that part in too but maybe Sania did not want any of it. Or even better Zee 5 can plan another series with Sania the other superstar of Indian tennis.