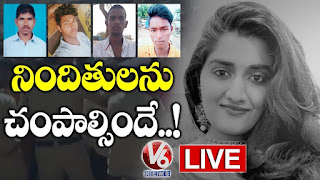 The media circus has reached such enormous proportions that the girl's family has locked the house and is imploring people not to visit their home. The colony has barricaded itself and is not allowing anyone even to enter their premises.

Electronic media has become insensitive; it telecasts gory pictures. They don't respect privacy. A delicate conversation between two sisters has aired ad nausea. In the race for TRPs and viewership, TV channels are rushing to the crime scene and are merrily recapping it. In many cases, they are talking to witnesses even before the police do. What is the guarantee that these media people don’t contaminate the crime scene?

Also equally horrifying is the type of questioning that they indulge in. No one is spared. Neither the victim’s family nor the families of the accused. The families of the accused are asked insensitive questions like “What punishment do you think your son deserves?”. This type of media hounding should stop. The government of India should bring in legislatures to rein in these media houses who take any and every opportunity to garner eyeballs and Television ratings.