Silly talk by Ajay Devgn and Sandeep Kiccha - is Hindi a national language? 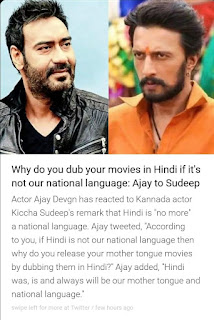 Silly talk by Ajay Devgun. May be shooting his mouth off. Hindi is the most spoken language in India and that is why movies get dubbed in Hindi.

Nowadays Hindi and even English movies get dubbed in all major (I refuse to call them regional languages) Indian languages like Tamil, Telugu, Kannada, Malayalam, Marathi, Gujarati, and Bengali.

The concept of a national language is noble but it can't be shoved down people's throats.

Maybe Hindi film movie makers like Ajay Devgun are jealous of the inroads the Telugu, Tamil, and Kannada movies have made in their own pocket boroughs.

Grow up for god's sake Ajay Devgun and make movies that will be watched by all language audiences, Including HINDI!

Even Hindi-speaking audiences seem to be shunning your films. Time for introspection.

2. Parthasarathy Rangarajulu: Well said Raju. Dubbing is done for a wider market. And Hindi is understood by a larger population. Why drag the national language issue here.

They want us to learn Hindi but they themselves don't want to learn any other language. The worst comes from the Hindi film industry. They behave as if it is the Indian film industry.

To date, they have not produced a movie like "Mayabazaar".

Mythological movies made by Mumbai film producers are a joke. Even the most flaunted serials like Ramayan and Mahabharat are no match for the Telugu mythological films. The actor who played Ravana in the Ramayan serial pales in comparison with the acting of N.T.Rama Rao and S.V.Ranga Rao as Ravana.

4. Deepesh Agrawal: A quick fact check. The official languages of the Union are English and Hindi. As such, there is no so-called “National language”. There are various official languages in India at the State/UT level. Having said that, I am reasonably sure that both of them have erred in their respective statements to a certain degree. Re: your comment regarding north Indians, even though there is an element of truth to it but really disappointed to see such a generalized comment, especially from someone as polished as yourself sir. I agree that a few people (maybe most) would have set the wrong impression but doesn’t necessarily mean that everyone has the same mentality. No two fingers of our hand are the same.

5. Anil Ramesh: Deepesh Agrawal yes you are 100% correct. I am glad you say that all are not the same.

It is a general perception. Again the official language is Hindi and English too is correct. But it can't be thrust down like history has shown.

People from Tamilnadu especially have shown great reluctance in adapting to Hindi as an official language. Some of them know but still would not speak it. Happily, it does not happen to a large extent in Telangana.

I think Ajay Devgun is referring to Hindi as an official language when he refers to it as the national language. Only his wording was wrong.

And everyone's mother tongue is precious to that person! We should learn to respect and celebrate other cultures and languages.

See the disastrous 3 language policy. All non-hindi speaking people have to learn Hindi but the same is not the case with native Hindi speakers.

Such policies go a long way in alienating the non-Hindi-speaking population not only from south India but from other parts of the country.

6. Ankit Singh: hahaha. As of now, only three Indian films—Mother India (1957), Salaam Bombay! (1988) and Lagaan (2001)—have been nominated for the Oscar award. Oscars are not given on the basis of the number of times heroes' cutouts are washed with milk and garlands. 😂

7. Qutub Mohd Khaja: Bollywood is on the verge of complete collapse. Hardly any talent left. It is corrupted by hate, politics, religion-based bigotry, gender exploitation, obscenity, etc. Nepotism is just a pretext, the ulterior motive is something ugly.

I really miss great singers like Kishore Kumar, Mohammed Rafi, Manna dey, etc, even our own Telugu singers like Bala Subramanyam, have contributed their art and talent.

The only hope left in the Indian film industry is in the South, especially in Telugu and Malayalam.

8. Parthasarathy Rangarajulu: I agree with you. No disputing they have their titans like Mehboob, Santharam, Guru Dutt, and a host of others. . We the Southern states have our own. You mentioned Maya Bazaar. Chandraharam, Melleswari, and Pathala Bhairavi are noteworthy for their mammoth sets and art direction. In a way, Sampoorna Ramayana of Tamil provided sketches for mythological films. Thank you.

9. Deepak Singh: Sir, the simple thing is that nowadays South movies are doing far better than what so-called Hindi Cinema is producing ridiculous drama just to mint money doesn't matter whether they are making fun of our rich Indian culture/ Heritage of India

If things will go like this time is not so far for these producers and their movies will vanish from the Audience.

They are afraid of South movies, especially in the last 5 years, Hindi Cinema has no match with them...Bahuballi, Pushpa, RRR the recent example

10. Anil Ramesh: True Deepak Singh, apart from the movies that you have mentioned try to see some Malayalam movies on OTT. They are grounded in India, have great locales, beautiful acting, sensible stories, and the movies are made on a low budget. At that low budget, the movies are profitable. I was looking at the cost of making Gangubai. It cost 125 crores! And made around 160 crores. In that 125 crores, Malayalam moviemakers would have produced 10-12 quality movies.

11. Ravindranath Tiwari: sir huge budgets are good for job creation, Many people are getting benefited from this

12. Anil Ramesh: Theoretically, you are correct Ravindranath Tiwari but does not happen in real life. a lot of black money gets laundered in this fashion and much of it is drug-related money and there are a lot of underground and mafia dons in this business.

And when you can create something at a lower cost why spend so much. comparing Gangubai and Mahanati, both were period films but where 100 - 160 crores were spent on Gangu Bai whereas Mahanati's total cost was only 25 crores (all data from Wikipedia).

The production values of both Mahanati and Gangubai are equally good or bad (as per your critical sense). So in that way, Gangubai was way over budget. on a budget of 100-160 crores, Gangubai earned 196.6 crores and a meager profit of 36 crores whereas Mahanati was made with a budget of 25 crores earned 83 crores, a profit of 58 crores!

15. Ravindra Nath Tiwari: Sir that's what is expected and I love this sir

17. Ravindra Nath Tiwari: Anil Ramesh sir huge budgets are good for job creation, Many people are getting benefited from this

19. Kailesh M Asher: but what I understand from the news is that this issue was opened up by Sudeep Kichaa who commented that Hindi is not a National language!! anyways, these are childish arguments from both sides!! As the mother of all languages is Sanskrit.