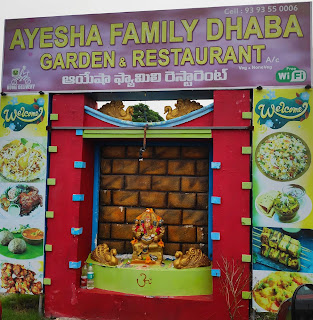 Clicked this interesting board at Piduguralla, Guntur district yesterday. The board says Ayesha Family Dhaba Garden and Restaurant but in the center is a Ganapathi statue. Is it a feeling of secularism? No chance! This is pure business! Cash in on customers from both religions.

Footnote: Anyhow they don't serve non-veg. They serve NONE - VEG!

Niketa Nigam: Ayesha is a Hindu name too

Raghavender Matam: Niketa Nigam according to?

Niketa Nigam: Raghavender Matam according to all the Ayeshas around the world who are Hindu

Raghavender Matam: Niketa Nigam so you don't have any academic source?

Niketa Nigam: Raghavender Matam how a name on hoarding is a source enough to assume it' is a Muslim person? Haven't you come across Ayesha or Aisha who is a Hindu? History says its origin was Muslim but is that ur only 'deciding factor'.

Anil Ramesh: Let me come in here. Ayesha here is a Muslim name and inside there was enough indication that this is a Muslim establishment!

Niketa Nigam: Anil Ramesh if there are other things that state it is owned by a Muslim Person that would be a different situation altogether but just going by this picture and the name, it would be wrong to conclude that just because it is named as 'Ayesha' it is a Muslim establishment. Ayesha is a very common Hindi name as well. In north India, you would come across way many Ayesha's, even brahmin girls named Ayesha. It has a very positive meaning in Hindi.

Raghavender Matam: Niketa Nigam that is the problem with today's India. Even Brahmins forgot Sanskrit and are naming children Islamic names. Tell me what's the meaning of Ayesha?

Niketa Nigam: Raghavender Matam the problem with people who bring religion into everything is that they cannot understand anything without bringing a religious debate into it. Irrespective of whose name Ayesha was in history it has its meaning which is " happy living". The point here was simply that " Hindus also use this name ( its the personal choice and cannot be questioned) so there is a possibility it is not a Muslim establishment". However, you will read it only in the light of religious tension.

Sri Nivas: For all the discussion that happened. Thank you very much. That was a disguise of religion... for business survival... right? wrong? subject to perspective and prerogative...

Anil Ramesh: Very good question Syed Shad Ali. I posted it because it was unusual and it triggered a thought process. In my view, names should be neutral so that they do not lead to any sort of reservations at any point in time. Here it seems to be a congruence of cultures and apparently, everyone is happy with the status quo.

End of the day the proof of the pudding is in the eating. If the food, ambiance, and price are right, customers would flock, otherwise, they would give it a royal miss. In my view only a good title does not guarantee a movie's success, content too has to be good.