The Long Tail by Chris Anderson - Profits of Selling less of More! 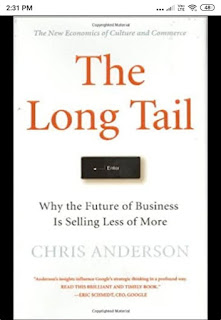 The long tail by Chris Anderson is a wonderful book. It was recommended to me by Dr.Madhusudan Kota around 10 years ago.

It is a great read and it tells us about out-of-box thinking. Traditional marketing always focused on the top of the business where there are heady sales, a huge customer base, and decent to healthy profits.

Conversely, the tail of any business has customers but less in number, consequently sales and questionable profits.

The long tail tells us how to be profitable doing business at the long tail.

The best example of a long tail business is the sports app 'Fan Code'. Fan code deals with sports events that many viewers might not be interested and once the majority is not interested the major sports channels don't buy rights and there is no live telecast.

But as demonstrated in The long tail, there is a large (by numbers) customer base for cricket series like Pakistan vs Zimbabwe, Pakistan vs South Africa, Ireland vs Bangladesh, and Bangladesh vs Sri Lanka, in India and throughout the world.

Pakistan vs Zimbabwe cricket series is available on Fan code for Rs 15/- for two test matches. And there is no live telecast on any channel or even it is available on a channel we need to subscribe for a month and later drop the channel and the process is very cumbersome.

On Fan code the transaction is seamless and we can watch what we want. Most readers might think that Rs 15/- is not much, multiply it with 10 lakh viewers from around the world and the figure becomes substantial.

Fan code is ultra-niche and my son only watches  Bayern Munich football matches Bundesliga, and he pays only Rs 5/- for each match, talk about micro customization!

The EPL league hosts 380 matches and I might not be willing to watch all 380. So with Fan code, I can watch only the 38 matches that are played by Manchester City or the 74 matches featuring Man City and Leicester City (another team that I like). This way I can save money and more importantly time.

So from theory emerges practice and practice leads to more theory. It is a symbiotic relationship.