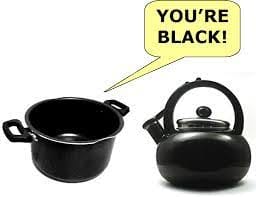 Sammy the ex-West Indies cricket player suddenly understanding  "Kallu meant black" when he was playing for Sunrisers Hyderabad during his IPL playing days is extremely amusing, to say the least.

Most cricket players including foreign players are ribbed mercilessly by all crowds including the Indian spectators. Most take it as par for the course and bear it as IPL is a gravy train that no one wants to miss.

Now that his IPL days are over Sammy is suddenly critical of SRH. Any how Sammy, even in West Indies cricket racism exists in another form.

And recently another West Indies cricket star Chris Gail ripped into Ram Naresh Sarwan and called him  "a snake and worse than a Corona Virus". Well well, Sammy it is like the proverb  "the pot calling the kettle black (pun unintended)!"